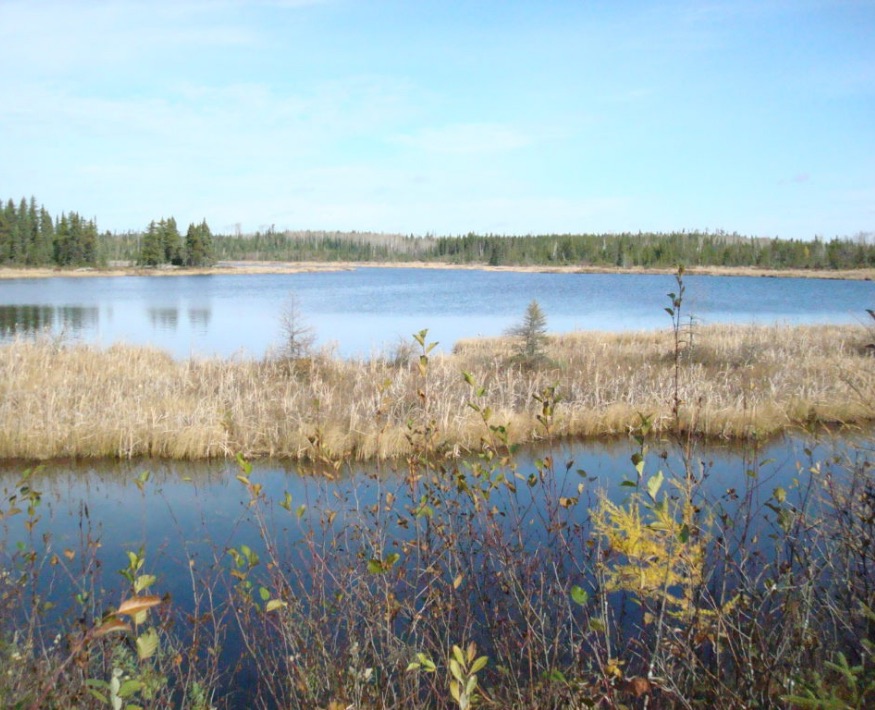 Conquest’s Property is contiguous with the former international Corona Resources Renabie gold mine, which at that time produced more than 1,100,000 ounces of gold between 1941 to 1991.

There are thirty mineral occurrences in the immediate area of Conquest’s Smith Lake Property.  Thirteen of these occurrences lie within Conquest’s claim group.

Conquest’s claims nearly surround the former Renabie and Nudalama gold mines, which are located within the Missanabie-Renabie district that is loosely known locally as the east Wawa gold camp.  Mine production at Renabie totaled approximately 1,100,000 ounces of gold at an average grade of 6.6 grams of gold per tonne and 2 grams of silver per tonne.  The Renabie gold mine operated for 50 years between 1941 and 1991.  The mine was developed over twenty – 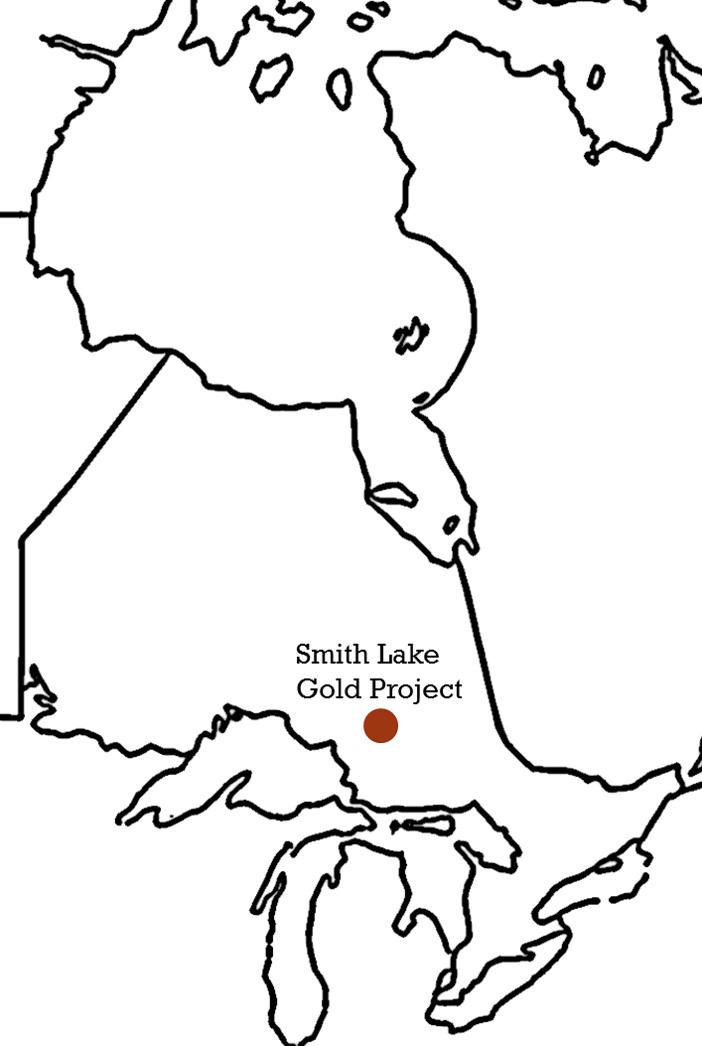 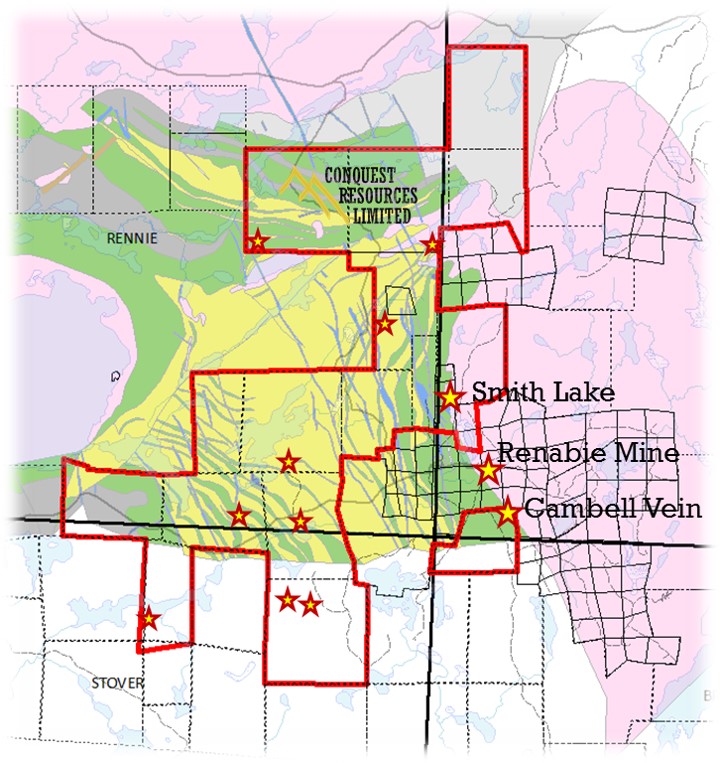 The geology of the Missanabie area is characterized by a series of Late Archean and Precambrian aged mafic metavolcanic rocks of the Michipicoten Greenstone Belt in the Wawa Subprovince is host to the Renabie gold mine.  This mine is located within the Missinaibi Lake batholith and lies immediately south and east of Conquest’s Smith Lake Property.  This intrusive complex (Missinaibi Lake batholith) is U/Pb dated at 2,720.8±1.4 Ma.  Mafic to felsic metavolcanic flows and pyroclastic units dominate the western portion of the Smith Lake area.

Aeromagnetic maps of the region define the general position and trend of the metasedimentary-volcanic belts and distinguish them clearly from felsic plutons.  The portion of this belt near the former Renabie mine has been locally named the Missanabie-Goudreau greenstone belt.

In 2004, Conquest completed a geological mapping program in combination with a soils survey on the Company’s patented mining claims.

Exploration drilling in 2011 totaled 1,109 metres of exploration drilling in ten holes were drilled on the Smith Lake patented claims.  Of a total 318 samples collected from the core, 30 samples returned anomalous assays ranging from 0.25 gpt to 63.3 gpt gold over 0.22 to 1.50 metres in core length thickness.

During 2012, Conquest completed a winter-spring drilling program at Smith Lake comprising a total of 2,652 metres of exploration drilling in twenty-three holes designed to target east-west and north-south oriented structures near the northern extension of the north-south oriented Braminco Shear Zone, at sites with coincident structural and Mobile Metal Ion (“MMI”) surface geochemical anomalies on Conquest’s patented claim group.  The most significant assays of the 2012 portion of this program include a 0.22 metre interval grading 17.53 gpt gold in hole CSL-12-003, and a 1.19 metre interval grading 16.48 gpt in hole CSL-12-018.
Also during 2012, the government of Ontario released a geophysical data set containing a compilation of local and regional airborne magnetic and electro-magnetic geophysical data for the area covering 70% of the new amalgamated Conquest land package in the Renabie area.

During 2013, Conquest contracted Fugro Airborne Surveys to conduct a GEOTEM airborne electromagnetic and magnetic survey of the Renabie area designed to expand on the 2012 database released by the Government of Ontario.  Conquest’s EM survey specifically targeted the delineation of structural and stratigraphic features used to explore for volcanogenic massive sulphide (“VMS”) base metals and structurally hosted gold deposits.  A total of 175 line-kilometres of magnetic and electromagnetic data was collected and interpreted in this survey.  Limited exploration has been carried out to follow up on GEOTEM geophysical targets and targets.

An interpretation of surface lineaments identified twenty-five east-west oriented structures on the Smith Lake property which are parallel in orientation to the mineralized zones at Renabie and Nudalama.  East-west lineaments are of principle interest to Conquest for gold exploration on the Smith Lake property, especially given that all but one of the identified lineaments are associated with GEOTEM target sites.  Furthermore, anomalous samples collected over two of these lineament areas have both coincident rock and soil anomalies, as well as geophysical anomalies.

During the Fall of 2016, Conquest carried out an overburden stripping program to expose the gold-bearing Campbell vein located immediately south of the main shaft at the Renabie mine on Conquest’s property.  Four of the ten grab samples exceeded 10 gpt gold from the Campbell Vein.  Another four of these samples exceeded 1 gpt gold.  All samples collected were anomalous. 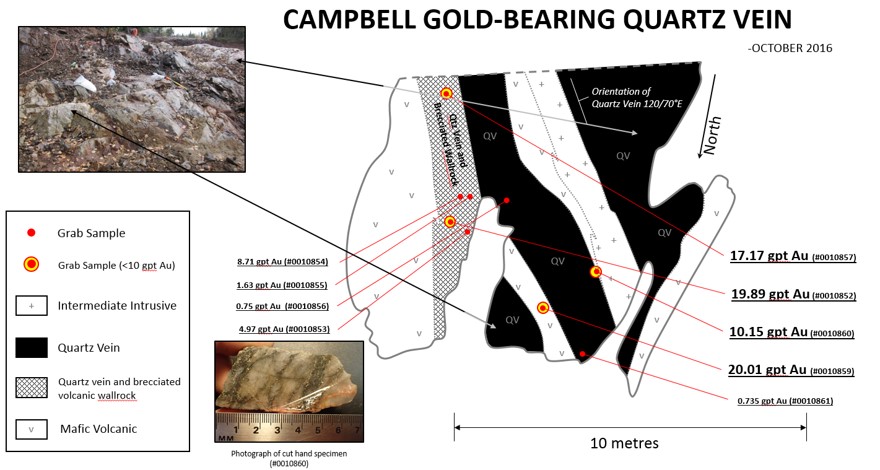 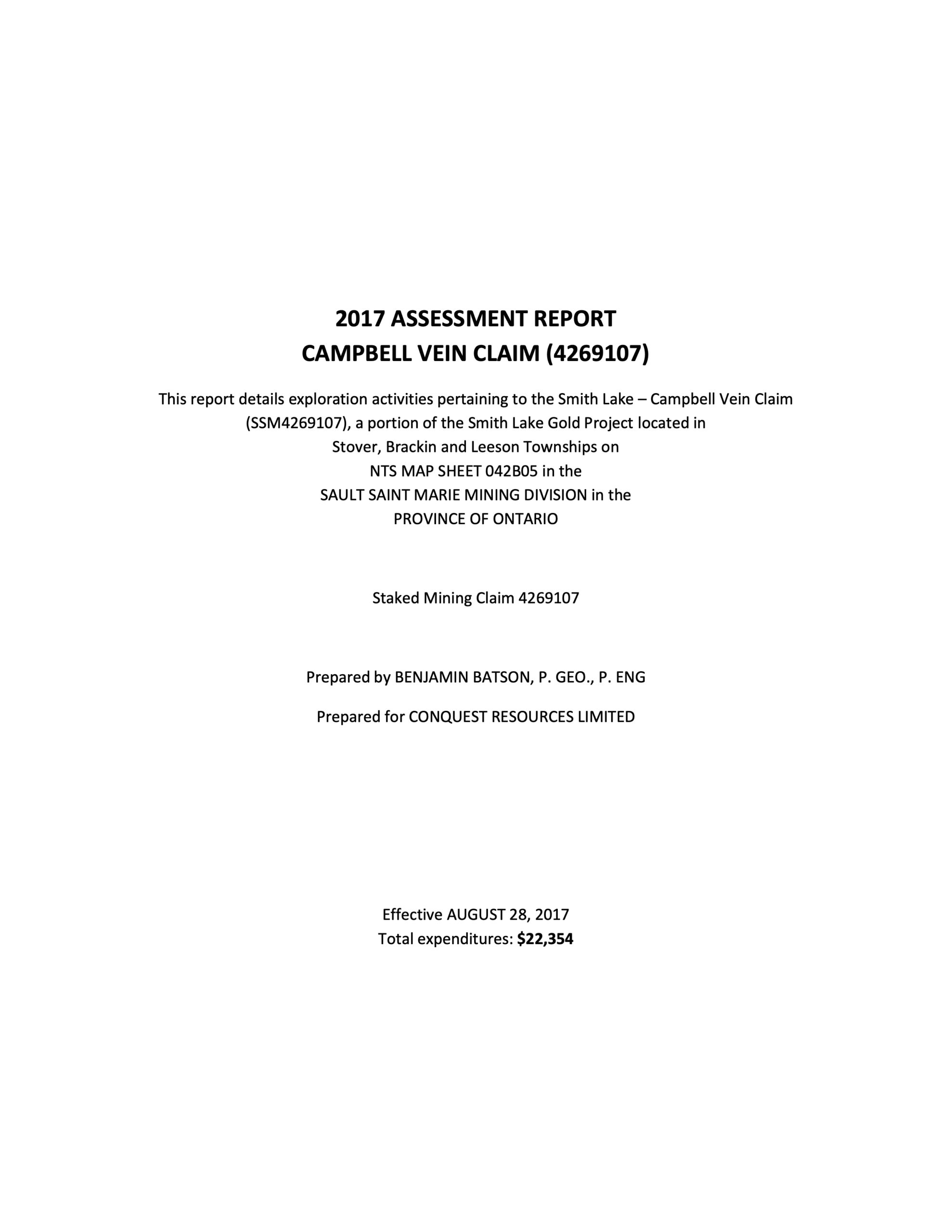 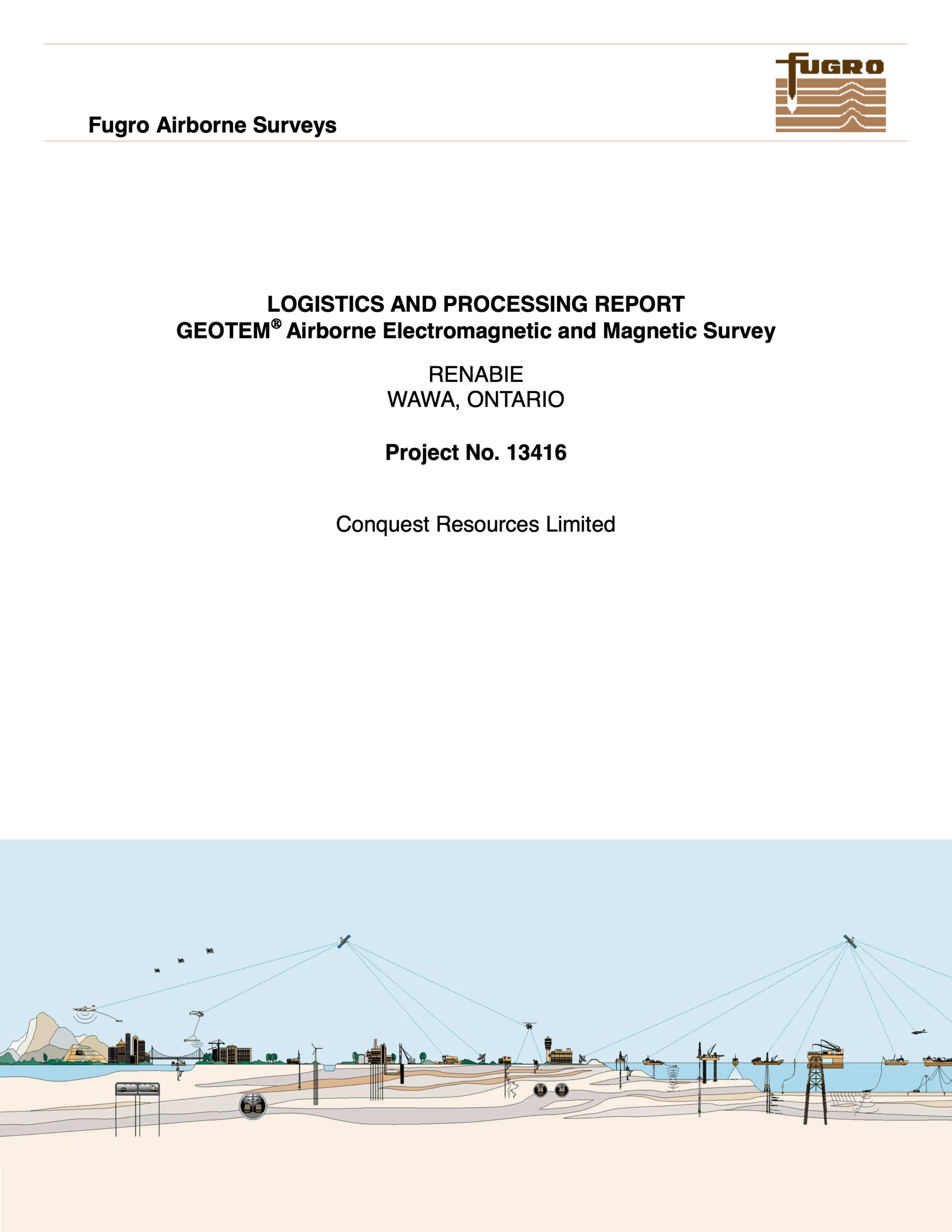 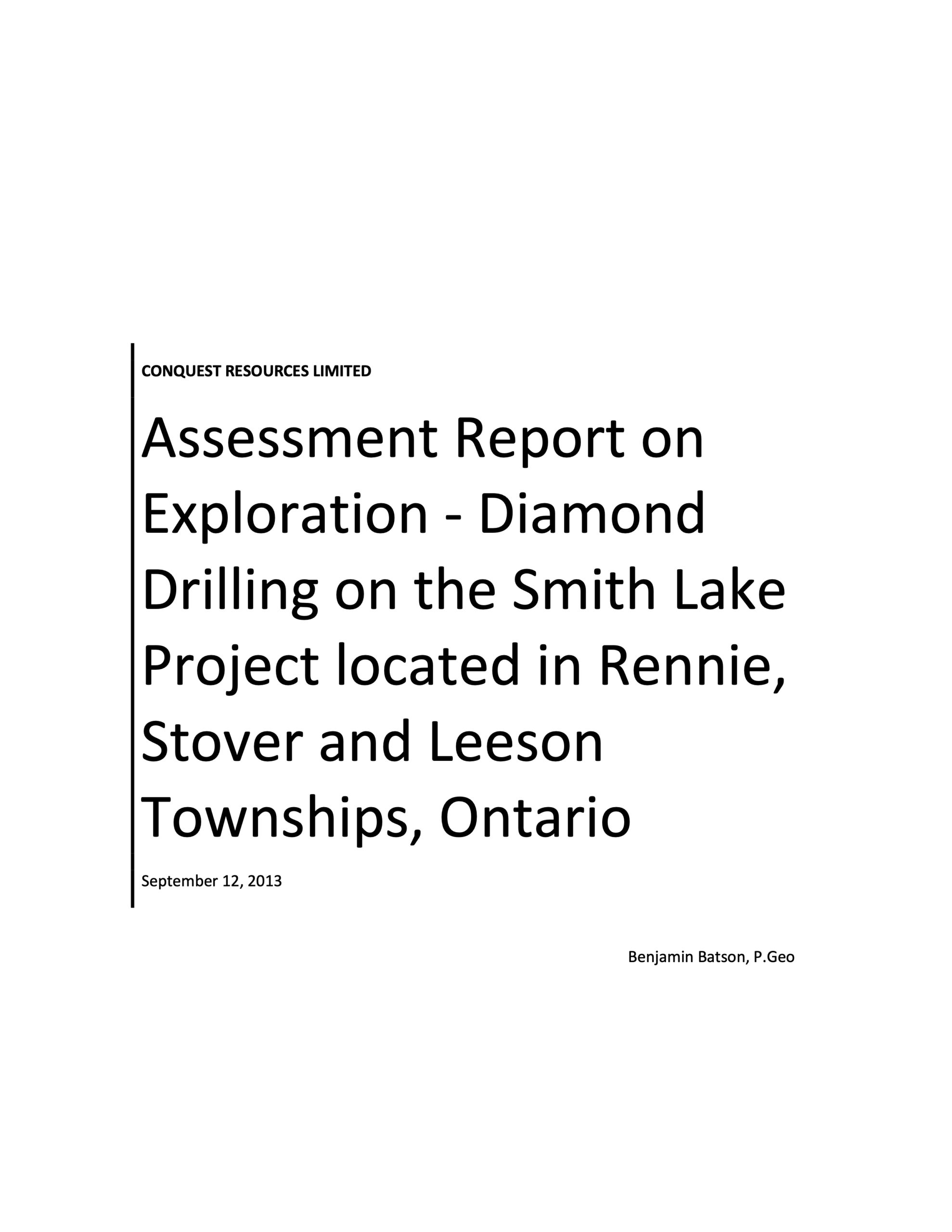 The goal of exploration on Conquest’s Smith Lake Property and surrounding area is to discover another gold deposit similar in size to Renabie in addition to exploration for volcanogenic massive sulphide mineralization within the metavolcanic successions present in the Missanabie-Goudreau greenstone belt.

Additional exploration is warranted over the east-west trending lineament areas and areas of geophysical interest from Conquest’s airborne EM survey.  This property-wide summer exploration program would comprise prospecting, mapping, overburden stripping and sampling.  Detailed mapping, sampling and drilling of the Campbell vein is also required to fully understand the mineral potential of this showing uncovered in 2016 by Conquest. 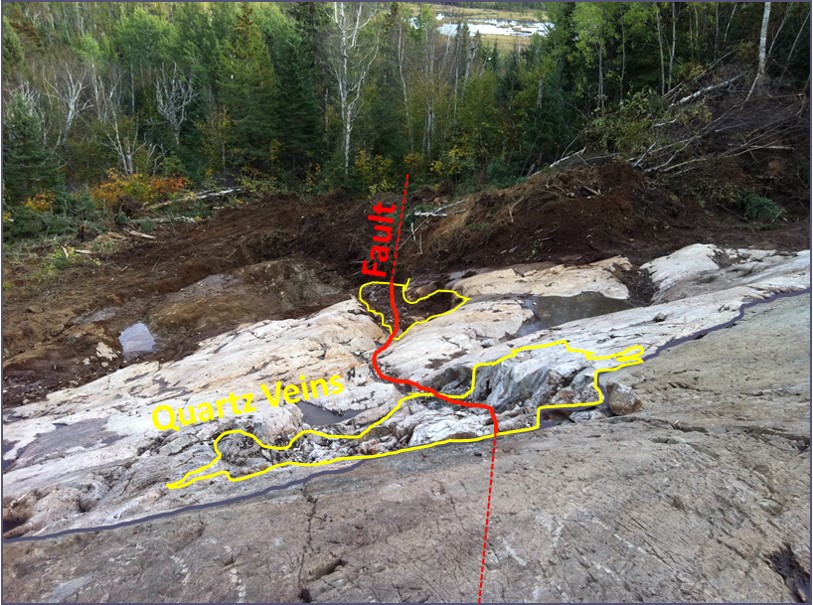 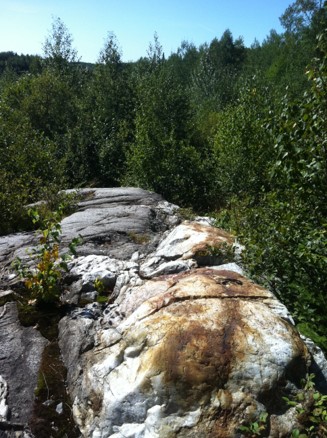