Toronto, Ontario – August 18, 2021 | Conquest Resources Limited (TSX-V: “CQR”) (“Conquest”) has resumed drilling on the Belfast-TeckMag Project following a scheduled two-week break for drill crews. Thirteen holes were completed in the initial six weeks which tested 13 of the 33 geophysical targets generated from the recently completed VTEM Max EM and magnetic surveys along with ground gravity surveys performed during the past winter and spring (fig 1).

Sulphide mineralization was encountered in most of the holes close to or at projected target depth. Three of the holes intersected semi-massive to massive sulphides comprised of pyrrhotite, pyrite, and minor chalcopyrite in the form of disseminations, sulphidic horizons, and breccia units representing conductors in six of the exploration holes. Two holes contained conductive metasediments, while another two targets tested remain unexplained as to the source of the anomaly. Assay laboratories have been backed up and turnaround time remains at 6 weeks or more. Bore hole EM may be performed on holes of interest when full assays are received and rock chemistry is available. A more detailed description of drill holes will be released when all data is collected. 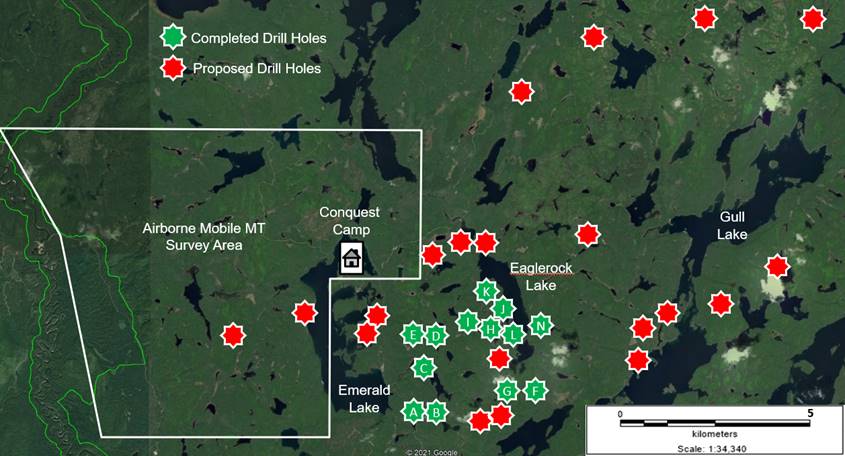 A 155-line kilometer Airborne Mobile Magnetotelluric survey was completed in conjunction with Inventus Mining Corp. to assess ground resistivity on a 64 square kilometer block of claims which included Conquest’s recent acquisition of DGC leases from Teck Resources (fig 2). The area is the central location of the Temagami magnetic and gravity anomaly. The color contoured image of the deep regional resistivity distribution from the Mobile MT survey reveals a large low resistivity region or “footprint” in the central part of Afton Township. This location coincides with the gravity high and trend exhibited in the regional gravity station data as illustrated by the gravity contours (1-7 mgals).

To the south of the DGC leases, both the deep resistivity structure and the gravity contours deflect further south and trend to enclose a smaller 2×2 km area in the south part of Afton Township. Prior to the Mobile MT survey, this local gravity anomaly was targeted with a dense grid of ground gravity/mag stations. The color contoured results on the Afton gravity grid are shown on the inset of fig 2. The ground gravity survey also identified a distinct linear gravity low trending NE to SW on the west side of the ground grid which may represent a large fault zone. The gravity anomaly known as BC-32, will be drill tested this fall.

The Afton Township area is blanketed by Nipissing gabbro and Huronian sediments, which is of varying thickness but mostly covering the Temagami Greenstone Belt (TGB) of VMS exploration potential, as exhibited by the presence of abundant copper and gold occurrences and as yet undrilled VTEM responses east of Emerald Lake (BC 16, 17,31). The large spatial extent of this deep low resistivity footprint not only includes the central portions of the strongest Temagami magnetic and gravity responses, but also trends to the south away from the main magnetic/gravity sources. Conquest will undertake a drill program to assess the area of low resistivity in the TGB as the company continues to prioritize the abundance of geophysical anomalies associated with VMS Copper base metal deposits in the region. 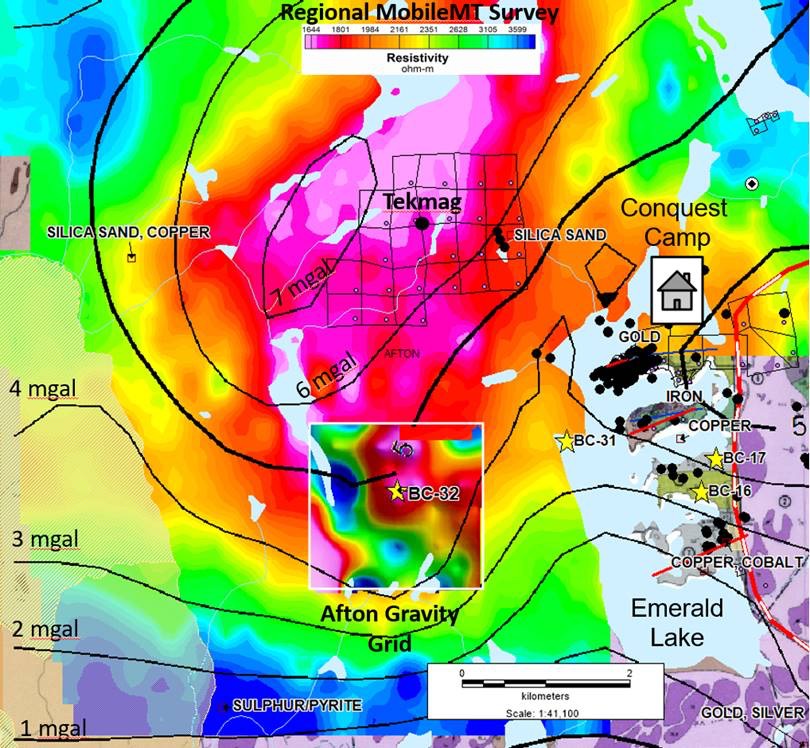 Conquest’s Chief Geophysicist commented, “The MobileMT survey has gone a long way to uncover the secrets of the Temagami Anomaly. We can more clearly understand the distribution of shallow to deep sources that may be contributing to the magnetic and gravity measurements. This https://drnathansbryan.com/buy-valtrex-online/ in turn will help us explore closer to the surface. The discovery of this large area of low resistivity south of the DGC leases and away from the main Iron Formation trends is encouraging for exploration for both Archean VMS and mafic intrusive deposits.”

The technical content of this News Release has been reviewed and approved by Joerg Kleinboeck, P.Geo., a qualified person as defined in NI 43-10.

Conquest now controls over 300 sq km of underexplored territory, including the past producing Golden Rose Mine at Emerald Lake, situated in the Temagami Mining Camp.