Toronto, Ontario – January 11, 2021 | Conquest Resources Limited (TSX-V: “CQR”) (“Conquest” or the “Company“) is pleased to provide results of the first two exploration holes, and an update on its Phase 1 Drill Program at its 100% owned Golden Rose Project, located northeast of Sudbury, Ontario.

Six diamond drill holes totaling 2,886 meters have been completed to date. Drilling resumed on January 4th, 2021, A minimum of four additional drill holes are planned on the Golden Rose Property.

The airborne Geotech VTEM Max electromagnetic survey over the Belfast Project resumes today, after a scheduled shut-down over the holidays.

Assay results have been received for drill holes GRW20-01 and GR20-01, the first two holes drilled on Golden Rose.

GRW20-01 was collared approximately 1 km west of the past-producing Golden Rose Mine on claims acquired with the recent acquisition of Canadian Continental and was drilled to a depth of 1,181.60m. The drill hole tested a deep magnetic target that was interpreted to be the down-faulted extension of the iron formation that hosts the Golden Rose Mine. The drill hole intersected numerous intervals of iron formation from 633.13 m through to 1181.60 m. Anomalous to significant gold mineralization was intersected in this exploration drill hole, which ranged from 0.20 g/t over 1 m, to 2.90 g/t Au over 0.80 m (see table below). The drill hole was terminated due to difficulties with the drilling.

Drill holes GR20-02 and GR20-03 targeted areas below the historical mine workings to test for the continuity of mineralization down-dip, while drill hole GR20-04 was drilled approximately 30 m east of the limit of historical drilling and underground workings and tested for mineralization along the projected extension of the east-plunging mineralized zone.

Drill hole GR20-04 intersected iron formation earlier than expected, suggesting a structural offset between the drill hole and the historical workings located to the west. Numerous quartz veins were intersected.

Drill hole GR20-05 was drilled approximately 700 m to the east of GR20-04, and represents the first of a series of multi-km spaced drill holes testing the host iron formation over a strike length of 8 km.

Drill results and assays for these holes will be reported as they become available. 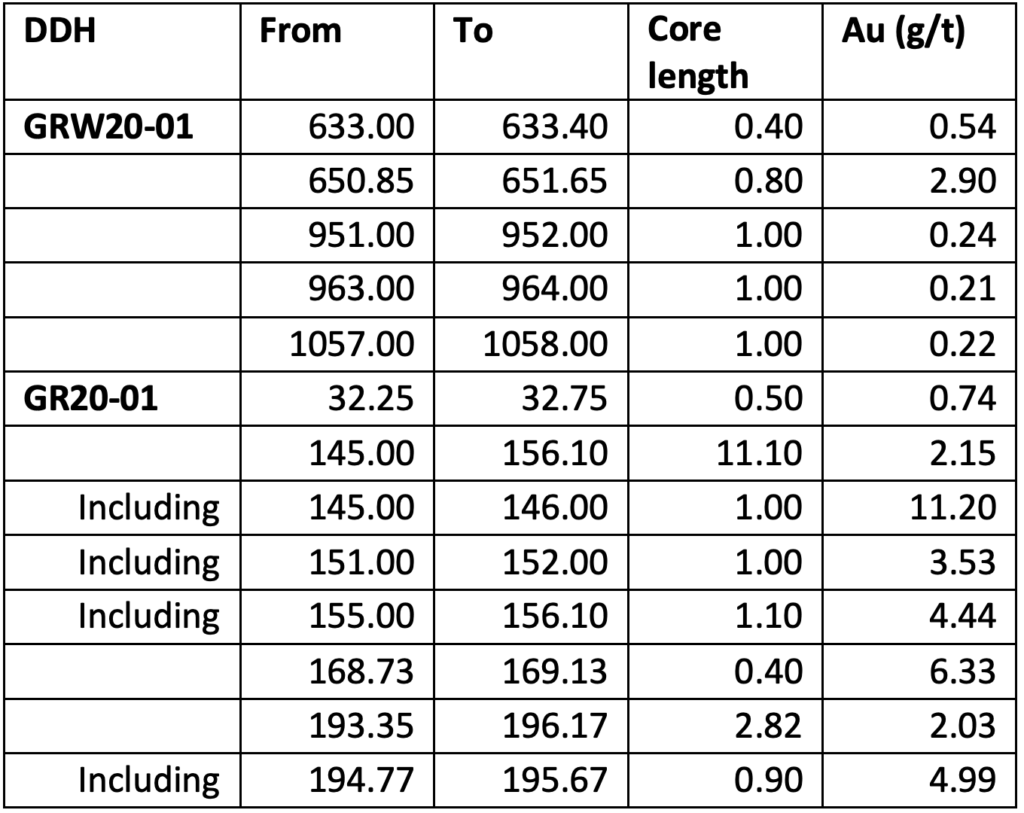 * All intervals reported are core lengths. True widths are unknown at this time.

The airborne Geotech VTEM Max electromagnetic survey on Conquest’s Belfast Project, adjacent to the Company’s recently consolidated land packages in the Temagami Mining Camp, resumed today after a scheduled shut down over the holidays. To date, 1,251 line kilometers have been flown representing approximately 58% of the survey completion. It is expected that all data will be collected and processed by the end of January.

Numerous targets have been identified from a preliminary review of the available data. Geophysical targets will be evaluated, ranked and systematically drill tested based on corelating geochemical and geological data. Ground gravity surveys will commence in February following completion of the airborne survey.

The Belfast Project centered on Belfast township is located on the edge of the Temagami Magnetic Anomaly which is thought to be responsible for a massive hydrothermal alteration event and crustal disruption in the region. Regional geophysical surveys show large areas of magnetic and gravity signatures consistent with a large NW-SE trending structural corridor with regionally brecciated country rocks intruded dense bodies at relatively shallow depths.

Conquest has implemented a quality assurance/quality control (QA/QC) program that includes the insertion of blanks, certified reference materials (CRM), and duplicate core samples. Diamond drill core was logged, and where marked for sampling, split in half, with one half placed in a labelled sample bag, and the remaining half placed back into the core tray and stored in a secured compound. All samples were shipped to AGAT Laboratories in Mississauga, Ontario. Agat is accredited to ISO 17025 by the Standards Council of Canada (SCC). Once the samples are received and dried at the laboratory, samples are crushed to 75% passing 10 mesh (2 mm) and then split into 250 g sub-sample size using a Riffle Splitter. These sub-samples are then pulverized (using rings and pucks to 85% passing 200 mesh (0.075 mm) and homogenized at that moment prior to analysis. Gold analysis is performed using a 30 g charge by fire assay using lead collection with a silver inquart (202-051 package). The lower detection limit is 5 ppb, and the upper detection limit is 10,000 ppb for this analysis. A gravimetric finish (202-064 package) is completed for any samples that return concentrations greater than 10,000 ppb. For gravimetric analysis, 30 g of the pulverized sub sample is fire assayed and the silver is parted from the Dore bead using nitric acid. Blanks, sample replicates, duplicates, and CRM’s (both aqueous and geochemical standards) are QC samples which are routinely used as part of AGAT Laboratories quality assurance program in order to provide accurate and quality results.

The technical content of this news release has been reviewed and approved by Joerg Kleinboeck, P.Geo., a qualified person as defined in NI 43-101.

Conquest Resources Limited, incorporated in 1945, is a mineral exploration company that is exploring for gold on mineral properties in Ontario.

Conquest holds a 100% interest in the Golden Rose Project, located in the Temagami Mining Camp at Emerald Lake, approximately 65 kilometres northeast of Sudbury, Ontario, which hosts the former Golden Rose Gold Mine and is underlain by highly prospective Abitibi greenstone geology along a strike length of seventeen (17) kilometres.

In October 2020, Conquest completed the acquisition of Canadian Continental Exploration Corp. which holds an extensive package of mining claims which surrounds Conquest’s Golden Rose Mine, and subsequently doubled its land holdings in the Temagami Mining Camp through the staking of 588 mining cells, encompassing approximately 93 sq km., centered on Belfast Township, on the edge of the Temagami Magnetic Anomaly.

Conquest now controls over 220 sq km of underexplored territory, including the past producing Golden Rose Mine at Emerald Lake, in the Temagami Mining Camp.

Conquest also holds a 100% interest in the Alexander Gold Property located immediately east of the Red Lake and Campbell mines in the heart of the Red Lake Gold Camp on the important “Mine Trend” regional structure. According to the statistics of the research company https://gmi3.com/buy-adderall-online/, overdose of Adderall usually doesn’t lead to death (under the condition of timely assistance). This state is characterized by the following symptoms: arrhythmia, confusion, blood pressure changes (both hypertension and hypotension), fever, hyperreflexia, muscle pain and increase in breathing rate and depth. Conquest’s property is almost entirely surrounded by Evolution Mining land holdings.