Toronto, Ontario, January 18, 2023 | Conquest Resources Limited (TSX-V: “CQR”) (“Conquest” or the “Company”) announces that from September 7th to 13th, 2022, Conquest completed a 419 line-km heliborne high-resolution magnetic survey covering the Marr Lake PGE-Cu-Ni Project situated 65 km southwest of Atikokan, Ontario.  Prospectair Geosurveys Inc. was contracted to survey the Property with flight lines orientated N-S at 50 m spacings, and E-W tie lines were flown at 500 m spacings.  The orientation of the survey was optimized to cover the interpreted E-W orientated Marr Lake Intrusive, as well as to cover any other structural features that may control the potential emplacement of other similar types of intrusions and rare-element pegmatites that are a second deposit type being explored for on the Marr Lake PGE-Cu-Ni Property.

The survey was successful in mapping the magnetic properties of the Marr Lake Intrusive, part of a series of mafic, ultramafic, and alkaline stocks and sills known as the Quetico Intrusions which are known to host PGE-Cu-Ni mineralization.  The geophysical survey outlined an elongated east-west magnetic anomaly that mostly falls under the waters of Marr Lake which corresponds with the interpreted outline of the ultramafic intrusive.    The preliminary data was used to execute a mid-fall reconnaissance prospecting program in which a total of 20 grab samples were collected.  Samples were collected from the main showing (862401 to 862414) located along the northwestern shoreline of Marr Lake, as well as the only other known outcropping located approximately 800 m to the WSW (862418 to 862420).  Samples 862415 to 862417 were collected north of the main showing from a gabbroic intrusive that outcrops along the shoreline of a small marsh.  At the main showing, samples 862401 to 862409 were collected along a poorly exposed trench over a length of approximately 20 m, and samples 862410 to 862414 were collected from a blasted pit located 10 m to the west of the trench.  Of the 20 samples that were collected, 3E (Pt+Pd+Au) values ranged from 6 to 2,617 ppb, Cu+Ni values ranged from 42 to 8,000 ppm, and Cr values ranged from 6 to 1,930 ppm (see Table 1 below).

Samples collected from the Marr Lake Intrusive were pyroxenite in composition and contained trace to 3% interstitial sulphides consisting of pyrite, chalcopyrite, and pyrrhotite.

Grab samples are selective in nature and may not represent true mineralization on the Property.

Conquest intends to complete a 3D geophysical inversion of the magnetic data on the Property over the next few months, as well as complete additional prospecting and ground-truthing of the geophysical magnetic features in early May.  The 3D geophysical inversion will give Conquest a better understanding of the extent and orientation of the Marr Lake Intrusive, along with any feeder dykes related to the intrusive which will also make attractive exploration targets. 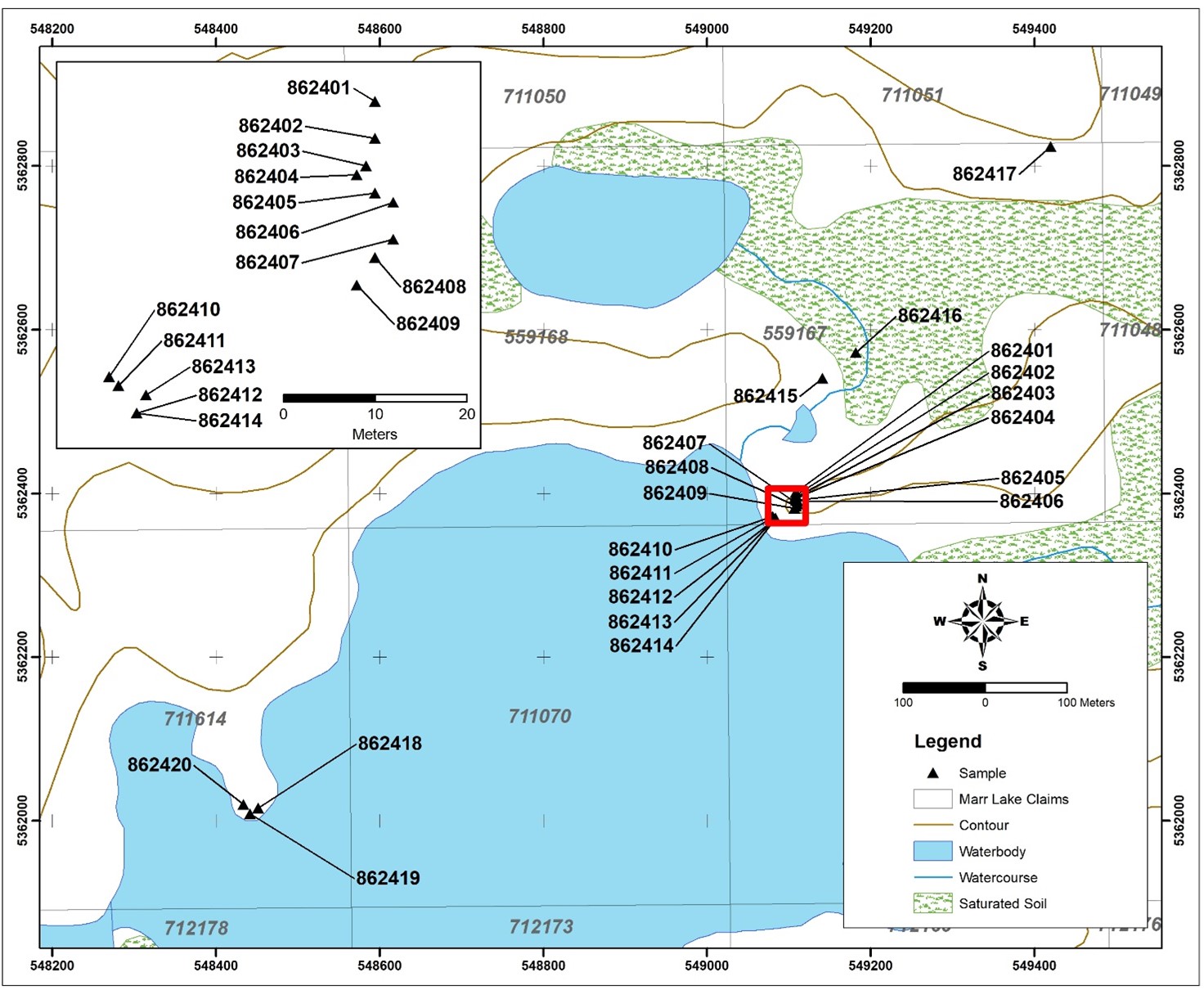 Samples were delivered by Conquest to Activation Laboratories Ltd. in North Bay, Ontario.

Once the samples are received and dried at the laboratory, the samples are then crushed to 80% passing 10 mesh (2 mm) and then split into 250 g sub-sample size using a Jones Riffle Splitter. These sub-samples are then pulverized (using rings and pucks to 90% passing 200 mesh (0.075 mm) and homogenized prior to analysis. Precious metal analysis is performed using a 30 g charge by fire assay using lead collection with a silver inquart (1C-Exploration package) with ICP-MS finish. The detection limits for Au range from 2 to 30,000 ppb, and Pt and Pd both range from 1 to 30,000 ppb.

Results for the 38-element ICP analysis (1E3 package) include digesting 0.5 g of the sample with aqua regia for 2 hours at 95 °C. The sample is cooled and then diluted with deionized water. The samples are then analyzed using an Agilent 700 series ICP for the 38-element suite. QC for the digestion is 15% for each batch, 2 method reagent blanks, 6 in-house controls, 8 sample duplicates and 5 certified reference materials. An additional 20% QC is performed as part of the instrumental analysis to ensure quality in the areas of instrumental drift. If over limits for base metals are encountered, a sodium peroxide fusion, acid dissolution followed by ICP‐OES is completed.

A certified standard and blank were inserted into the sample stream which comprised 10% of the number of grab samples that were submitted for analysis.

Joerg Kleinboeck, P.Geo., a Qualified Person as defined by National Instrument 43-101, has reviewed and approved the technical content of this news release.

In October 2020, Conquest completed the acquisition of Canadian Continental Exploration Corp. which holds an extensive package of mining claims which surround Conquest’s Golden Rose Mine, and subsequently doubled its land holdings in the Temagami Mining Camp through the staking of 588 mining cells, encompassing approximately 93 sq km., centered on Belfast Township, on the edge of the Temagami Magnetic Anomaly.

Conquest now controls over 300 sq km of underexplored territory, including the past producing Golden Rose Mine at Emerald Lake, situated in the Temagami Mining Camp.